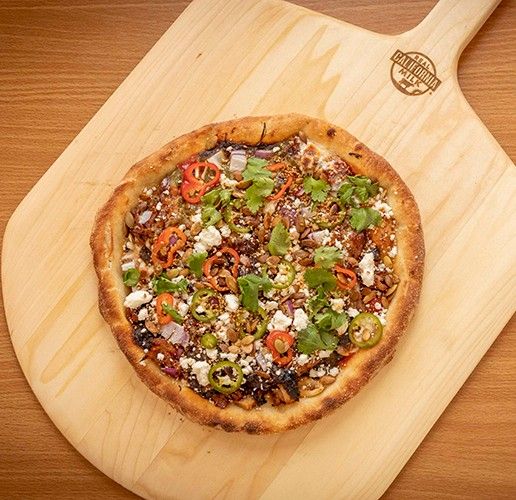 To prepare Pizza Dough, dissolve yeast in warm water with a pinch of sugar until mixture is fragrant and begins to froth and grow in volume. Start a timer for 5 minutes, then place flour and masa in a stand mixer with dough hook in place. Start mixer on low speed to aerate flour for 30 seconds. Add proofed yeast mixture and allow to mix for 30 seconds. Add cool water, pouring 2/3 down the center of the dough and the remainder down the sides of the bowl as the mixer works. Let dough mix for the remainder of the 5 minutes. Let dough rest for 5 minutes. Before turning the mixer back on, make a well in the center of the dough and add the salt. Turn the mixer to low speed and mix for 3 minutes. Stop mixer, make a well in the dough and add the oil; turn mixer on and mix for 2 minutes. Remove dough from mixer; portion into 7-ounce (200g) balls. Place in refrigerator. Let dough ferment for 24 to 48 hours. When ready to use, take dough out of refrigerator and proof 2 hours until service or until ball has doubled in volume and reaches an internal temperature of 70-75°F.

To prepare Slow Roasted Carnitas, mix brown sugar, salt, oregano, cumin, smoked paprika and pepper in a spice grinder. Rub pork with spice mixture and orange zest. Heat oven to 450°F or broil; roast tomatoes, tomatillos, poblanos, onions and jalapeños until skins begin to char, about 10 minutes. Roast garlic until brown and fragrant, about 3 minutes. Roast limes until they begin to char. Rough chop al the roasted vegetables and squeeze limes and oranges over. Mix in vegetable oil. Heat cast iron skillet and brown the outside of pork. Place pork in roasting pan and spoon vegetable mixture over top. Pour pork or chicken stock in pan until 1-2 inches deep. Cover tightly with foil. Roast for 6-8 hours, or until falling apart, basting with its own juices after about 3 hours.

To prepare Salsa Verde, heat oven to boil or heat wood fired oven to 600°. Toss tomatillos, jalapeños, poblanos, tomatoes, onion and garlic with oil and salt. Broil until soft and a light char forms on skin. Flip vegetables with tongs and broil on other side until skins are charred. Place vegetables and roasting juices in blender. Add remaining ingredients and blend until smooth. Season with additional salt, to taste.

To prepare the Chili Mole, heat oil in a medium saucepan. Add minced garlic and cook until lightly browned and fragrant. Add chili powder, cinnamon, cumin, oregano, salt and pepper; cook stirring to blend, until fragrant, about 30 seconds. Whisk in tomato sauce, broth, peanut butter and chipotles in adobo sauce, to taste. Bring to simmer, whisk in Mexican chocolate; reduce heat to medium-low and cover. Cook until thickened. Remove from heat and hold until ready to serve.

To prepare Mexican Queso Crème, place Crema Mexicana in small saucepan over medium low heat. Cube the Oaxaca and Asadero cheeses into ¼-inch chunks and add to the crema. Slowly heat, stirring until cheese is fully melted and the consistency of the sauce thickens slightly, about 10 minutes. Using an immersion blender, blend until smooth. Remove from heat. Store in a squeeze top bottle and store in refrigerator until ready to use.

To prepare the Pickled Peppers, seed all peppers then slice them about 1/8 inch think on a mandoline. Combine remaining ingredients in small saucepan. Heat, stirring over low heat until sugar and salt fully dissolve. Place peppers in mason just and pour liquid over making sure peppers are fully submerged. Store in refrigerator at least 12 hours before use.