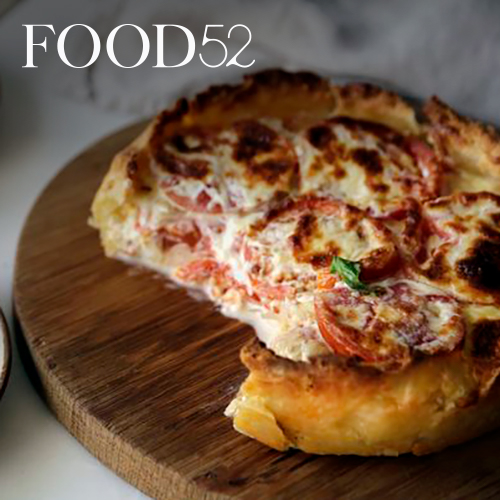 2. Make a well in the center, and add the water a few tablespoons at a time and mix just until the dough comes together. Form the dough into a 1 inch thick disc, wrap tightly in plastic wrap, and refrigerate until well chilled (at least 30 minutes).

3. Lightly grease a 9-inch springform pan and place it on a baking sheet lined with parchment paper. On a lightly floured surface, roll out the dough to 1/4-inch thick. Transfer it to the springform and trim the edge so there is 1/2-inch overhang all around. Chill the dough inside pan for at least 30 minutes in the refrigerator. Towards the end of chill time, preheat the oven to 425° F.

4. Dock the chilled dough with a fork on the base and sides. Line the crust with parchment paper and pie weights, and bake until the crust is beginning to brown at the edges, 15 to 20 minutes. Remove the parchment and pie weights. If the base looks visibly wet or under-baked, return the crust to the oven without the pie weights for another 5 minutes.

5. Brush the base of the pie dough with egg white and sprinkle the remaining 1/2 cup Jack cheese on top. Return to the oven for 2 more minutes. Use scissors to cut the excess crust so it's flush to the edge, then cool the crust to room temperature.

6. While the pie is cooling, make the filling: Arrange the tomatoes on a paper towel-lined baking sheet. Sprinkle each tomato slice lightly with salt, then place more paper towels on top. Let sit for 10 to 15 minutes - you're removing lots of the excess moisture so the pie isn't too wet inside!

7. In a medium pan, heat the Real California butter over medium heat. Add the onions and sauté until translucent, 4 to 5 minutes. Add the garlic and sauté until fragrant, 1 minute more. Season with salt and pepper. Cool to room temperature.

8. In a medium bowl, whisk the Real California mascarpone and mozzarella, egg, and egg yolk to combine. Refrigerate until ready to use.

9. When you're ready to assemble the pie, place the par-baked crust on your work surface. Place a layer of tomatoes in the base, then top with a layer of onions. Continue layering, ending with tomatoes.

10. Pour the mascarpone mixture into the center of the pie, and spread into an even layer - nearly to the edges. Bake until the crust is golden brown, the tomatoes are bubbly, and the topping is golden. Let cool at least 30 minutes before slicing and serving. (The pie is best when you let it cool COMPLETELY - you can reheat individual slices on a baking sheet, wrapped in aluminum foil at 325°F for 10 minutes.)

11. To unmold the pie, run a knife all around the edge of the crust, then unhinge the outer part of the springform pan. The pie should release easily. You can use a large spatula to remove the pie from the base, or leave it on the base for slicing and serving (sometimes it can be difficult to remove from the base while still warm).