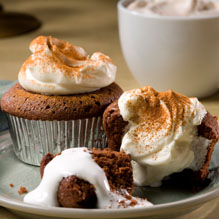 2. In a small bowl, combine cocoa powder, flour, baking powder and salt; set aside. With an electric mixer, cream together butter and sugar until smooth. Add eggs one at a time, making sure each is incorporated before adding the next.

3. In a small bowl or measuring cup, stir together milk, vanilla extract and lemon juice. Mixture will curdle slightly.

4. With electric mixer on low speed, add one-third of cocoa and flour mixture to butter and sugar mixture, mixing until combined.

6. Evenly divide batter between cupcake molds. Bake until a toothpick inserted in the middle comes out clean, about 15 minutes. Cool for 15 minutes. Remove the cupcakes from the pans. Cool completely before frosting.

1. Scoop a hole out of the center of each cupcake about 3/4-inch deep and 1 1/2-inches wide. Fill each hole with 1 tablespoon of marshmallow fluff. Cover with plastic wrap until ready to serve.

2. Just before serving, place a large dollop of whipped cream on top of each cupcake. Dust with ground cinnamon and serve immediately.